A person's eyes are said to be the windows to the soul. Often, you can tell how someone is feeling and what they think just by looking into their eyes. They are one of the most distinctive features a person has. Of course, all eyes are unique, and no two people have the same patterns and colors, but do these colors hold a deeper meaning? Almost all cultures believe so to some extent. Beliefs about eye color range from determining someone’s personality to indicating that a person is evil.

our genes determine your eye color, passed down from your parents and possibly even skipping a few generations. The genes involved in deciding your eye color primarily determine the strength and placement of melanin, the pigment responsible for hair, skin, and eye color. The more melanin you have, the more likely it will be for your genes to produce dark colors.

There’s a muscle in your eye called the iris, named after the Olympian god of rainbows and color. This muscle determines how much light enters your eye. The iris contains a pigment called melanin, which makes it opaque and protects the pupil from excess light. When exposed to bright light, the iris contracts, blocking some of the light from entering. When you’re trying to see in the dark, the iris expands to allow every scrap of available light into the pupil.

Interesting Facts about How Genes Determine Your Eye Color

There are two main types of genes: dominant and recessive. For example, in most cases, a person's eye color is determined by two genes. These genes determine whether a person's eyes are brown or blue. Blue and green eyes are very similar, and along with grey, are subtypes of the blue gene. To simplify, we’ll look at two genes and their odds of being inherited or expressed, based on the parents’ eye colors.

We’ll call brown D (dominant) and blue r (recessive). To determine the likelihood of simple 4-part combinations, scientists use a tool called a Punnett square (shown below). The dominant gene overpowers the recessive gene, making it more common overall. If both parents have only the brown-eyed gene, all of their children will inherit it. If someone has two blue-eyed parents, the children can only inherit that that single gene.

When a parent has one dominant gene and one “hidden” or recessive one, what the child will look like is up to the whims of chance. Endless DNA combinations can happen depending on the specific egg and sperm that merge to create a new life. 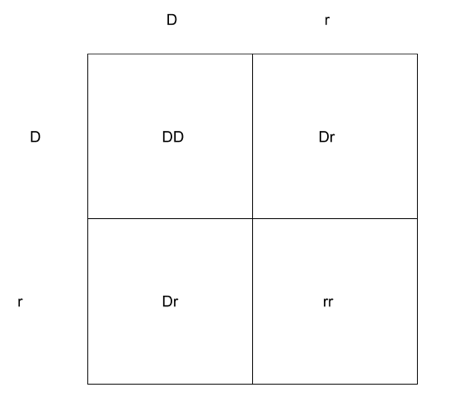 Now, let’s say that one parent has two brown-eyed genes and the other has two blue-eyed genes. The child will inherit one of each but will have brown eyes because (being dominant) brown always wins a genetic tie.

Eye color is actually more complicated than a single pair of genes, making the combinations more complex and the likelihood of inheriting an eye color less straightforward. In fact, according to American Academy of Ophthalmology, blue eyes aren’t the result of pigment so much as the lack of one… making blue eyes more akin to how water and sky look blue when they don’t actually have a color.

Globally, experts estimate that 55-80% of people have brown eyes, 8-10% have blue eyes, 5% have hazel, 5% have amber, 2% have green, and less than 1% have gray, purple, red/albino, or the genetic mutation that causes heterochromatic (mismatched) eyes.

What About Red Eyes?

True red eyes only occur when a creature is albino. Albinism is when a creature’s genes code for very little or no melanin at all. This results in pale or white hair follicles and light-colored skin that is more sensitive to sunlight. Because there is no melanin in the iris, the colored part of the eye, most human albinos actually have blue eyes. In some cases, if the blood inside the eye is prominent enough, it can appear red. This is more common in animals than humans, and luckily, most albino people don’t have pure red eyes like the mice and rabbits we see in pet stores.

When the whites of the eyes are red (but not the iris), they are considered “bloodshot.” Bloodshot eyes are a result of environment and not genetics. This redness happens when the tiny capillaries in your eyeball burst and leak blood. While not dangerous by itself, it can damage your eyes if it is too severe or prolonged. Allergies, tiredness, over-worn contacts, or a preexisting eye condition can also cause red or bloodshot eyes. If you have bloodshot eyes for an extended period or due to an unknown reason, seek medical advice.

What Does Eye Color Represent in Different Cultures?

Your eye color often helps determine how people think about or interact with you. People born with blue eyes or rarer colored eyes like green, gray, or amethyst are often portrayed as exotic in American culture and media. In contrast, those with more common eye colors like brown or hazel eyes don’t get as much attention. In American literature, blue eyes are compared to things like oceans, skies, and sapphires.

Green eyes receive metaphors such as forests, emeralds and are seen as symbols of luck. Grey eyes are called dark and mysterious and are often equated with storms or ice. Authors frequently draw associations between purple eyes and magic. Brown eyes often receive more mundane descriptions, like mud, chocolate, or coffee.


According to this article on the subject of eyes, traditional Islamic culture believed that people with blue eyes had been blessed with qualities from the divine. Several other religions and belief systems regard a type of amulet modeled after a blue eye as an “evil eye.” Despite its foreboding name, users claim it is a benevolent charm to keep true evil at bay.

Many cultures and belief systems view green eyes as a symbol of jealousy or cunning. Others believe it indicates a unique closeness to nature, the ability to love passionately, or a tendency to be curious. It has been said that green-eyed people get jealous easily because they love too profoundly and fear getting their hearts broken. Green eyes often go along with red hair, and those of Celtic descent are famous for their “wicked tempers,” which may affect the common perception of green-eyed individuals.

People with brown eyes are said to be more ambitious and goal-oriented than others. Often people view brown eyes as a symbol of independence, bravery, rebellion, and hard-headedness. If you have brown eyes, you may have an easier time making and maintaining friendships.

The rarest eye colors are almost always associated with being mysterious, intriguing, mystical, and sometimes even magical. In works of fiction, the main character is always the most likely to have a rare eye color. If you have a rare eye color, it is probably considered unique and beautiful by others. While some may view it as intimidating, others see it as intriguing and mysterious.

Has Society’s Opinion of Eye Color Changed Over Time?

Because lighter eyes are rarer worldwide, the fashion and modeling industries often view blue eyes as attractive and may be more inclined to hire people with blue eyes. Lighter eyes can be viewed as more expressive, since the contrast between pupil and iris is more visible, displaying mood changes more easily than dark eyes can. On the other hand, many artists love portraying darker eye colors because of the opportunity to play with lighting and shading, and dark eyes more easily reflect scenery in dramatic movie closeups.

Everyone can be beautiful in their own way, no matter their hair, skin, or eye color. Humans love self-adornment and playing dress-up, and who hasn’t wondered what they’d look like with different eyes? If you’d like to change or enhance your eye color, colored contacts are the way to go. For quality colored contacts at a reasonable price, feel free to visit WebEyeCare and shop our wide selection of colored or prescription contacts. We offer various colors, from blue, green, or brown, to more unique colors like purple, gold, or gray.

Our mission at WebEyeCare to help you live your best life, and that means taking care of all your prescription vision needs and any accessory pieces you want. We look forward to doing business with you!